I have made some very special friends at the Soldiers Home—and lost far too many of them. 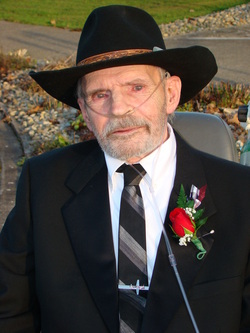 Mike and I actually had our “closure” conversation weeks before he died. He was in the hospital. He told me he was surprised he’d lived through the night, and he wasn’t sure he could do it again.
“I don’t even remember how I met you,” he said.
“I do,” I said. And I reminded him how on my first day as a volunteer, feeling lost and useless, I somehow ran into his buddy Jim in the hallway, and I kind of suggested a time or three that I’d really, really like to meet a resident.
I reminded Mike how Jim snuck me around the privacy curtain in Mike’s room and announced, “Have I got a woman for you!” and how after that day I just kept showing up in Mike’s world, looking for a friend and a connection and a purpose.
“I don’t think it was an accident that I ran into Jim,” I told Mike.
“I know it wasn’t,” he said.
I was crying but trying not to.
“I think my whole life was meant to get me to that point,” Mike said.
I hugged him goodbye, even though he lived through that night and quite a few more.
“Me, too,” I told my friend Mike. “Me, too.” 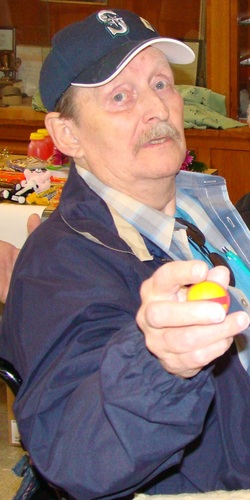 I knew of Gary before I knew Gary—he was one of those people I really, really wanted to know better. And then one night, as I was working alone on a jigsaw puzzle in the Activities Center, Gary zipped up and sat right by me. And talked. We talked about his childhood and his health challenges and his challenges as president of the Soldiers Home Resident Council—he said he’d wake up at 3 in the morning troubled by a resident’s concern; I told him that was only because he cared.
We had connected. And my respect and admiration and love for Gary only grew with time. Gary was an amazing blend of sarcastic gruffness and extreme sweetness. We always, always laughed together, but we also talked seriously, and deeply. He just accepted me and everything and everyone I cared about. (The first time he met my son, Gary told him, “Your mother is a wonderful woman.”)
Gary and I had just one awkward moment—but even that was sweet. On one of my birthdays, Gary said, “If you weren’t married, I’d give you a birthday kiss.” I told him I wanted one anyway, but then I wasn’t sure which body part to offer up, and we conked heads and I turned all red and he kissed my cheek, as it turns out, and we never mentioned it again.
Gary constantly and consistently resisted letting me interview and record him—he told me once I’d talked 25 other people into it, he’d be Number 26. I wholly and eagerly expected that to happen—but it never did, and you really shouldn’t put off things that really, really matter. 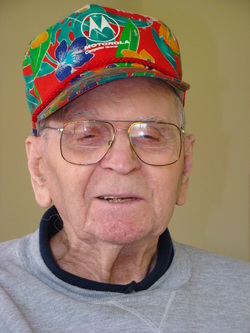 Ken Levick was a sharp, witty man who loved word games, winning at Bingo and—more than anything—his sweet wife, Betty. I have two favorite memories of Ken: his video interview, where he laughed out loud at his own memories, and one evening when we simply sat in his room while he talked about his wife. He wanted more than anything for Betty to join him at the Soldiers Home—she made it toward the top of the waiting list, but passed away before moving in. As much as I miss Ken (and his neon-bright Motorola hat and smile), I love that they’re together now.

It took me a while to get to know Ann Lawson. At Bingo—and possibly everywhere else—she had very strong opinions about how things should go, and she was very vocal when things didn’t go that way. But gradually we talked more and more, and found little connections that added up to friendship. As the attendance-taker at Bingo, Ann took her responsibilities seriously, and she was immensely capable. She also had an admirable knack for sewing and ceramics—and for getting right to the point. She was a strong woman, and I admire her for caring so deeply. 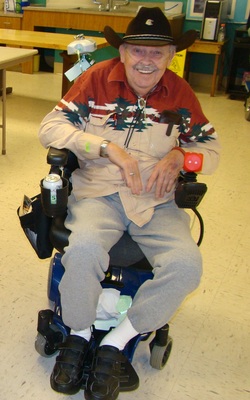 I loved Cal for his sincere warmth; his goofy sense of humor; and his genuine, gentle presence. In many respects, Cal was a lucky man— he always won at Bingo (and he always yelled—“Bin-GO!”— as if it were a surprise), and at the casino (his son took him regularly). He loved Red Hots, iced tea and hot dogs (at the Soldiers Home’s 2011 Super Bowl party, he ate three), and every once in a while he’d tilt his trademark cowboy hat off to one side and stick out his tongue and giggle. He was filled with love, and he radiated goodness. He made me smile every single time I saw him. Plus, he was a poet; this beautiful gem recently appeared in the Soldiers Home newsletter.

Memories of a Wedding
by Cal Bush

Hope you didn’t notice the tremble in my voice, or the shaking of my hands.
My knees were waffling and I could hardly stand.
I have slain the dragon,
I have seen the world.
In fact there was a time I could have rode the wind,
Roped the moon, scaled a mountain,
Fought a bear with a hair brush.
All this for you.
But it sure was hard to stand in front of a preacher and say “I do!”
I can joke about it now and I often do,
But I still remember the way I shook when I married you.
When it was over, I swallowed with relief.
That was 14 years ago in Midwest Omaha.
You’ve gotten a little older, I’ve turned a little gray.
You’re still beautiful and I’m just as handsome as on our wedding day.

Bill was one of the more involved residents at the Soldiers Home—he worked in Chilson Hall and always delivered the prize cart to the Bingo room. Ray McDade lived across the hall from him in the Roosevelt Barracks—Bill’s door was almost always open, so I’d knock just to say hi. Bill was always--always—pleasant, sweet and personable to me, and to my son and parents. He was one of the good guys, and he is missed. 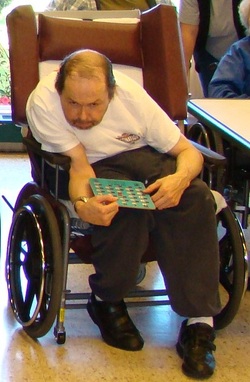 Danny was one of the first residents I met at Bingo—he was a constant presence, always at the same spot, and a constant winner. Danny stood out for a couple reasons: He usually picked nonfood prizes (he was a big fan of tools and gadgets), and he usually wanted a push back to his room before the last Blackout. His room was stuffed with Bingo winnings—and movies—and it was always a challenge to find room for his latest loot. But we did. Every time I told Danny good night, I always said I’d see him again soon. 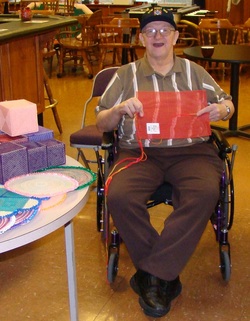 When I first started volunteering at the Soldiers Home, Ray McDade was the Bingo skipper, and Jim Merz was first mate. Jim had the sweetest voice, and attitude, ever—but he also had a Purple Heart Combat Veteran hat. We had Michigan ties in common, and Jim knew so much about so much, it was effortless to talk to him, and impossible not to like him. Jim had had a heart attack the last time Mike Marquie was in the hospital; when I visited Jim in ICU, I figured I was saying goodbye. But Jim bounced back, and Jim came back to Bingo. This photo was taken at the December 2010 Holiday Bazaar, where Jim sold his handcrafted and colorful placemats, tissue holders and Christmas stars. I have three of his ornaments, tangible reminders of Jim’s inspirational resilience and spirit.

Dee J died the same day as Jim Merz: Aug. 20, 2011. They were a lot alike in a lot of ways, but Dee J had a sarcastic edge to him—which, naturally, I loved. I never took a picture of Dee J because he asked me not to: He had been in undercover law-enforcement, he said, and he didn’t want the bad guys to find out where he was. Dee J was one of the good guys: a Bingo regular who routinely filled his scooter basket with loot—and always filled the Bingo room with warmth, wit and laughter. 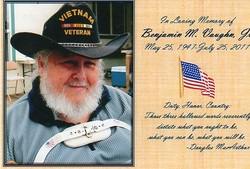 Ben was Mike Marquie's last roommate. Ben and his wife, Faith, were regulars at Bingo (Faith still is; she gave this memorial card to me during one session).  They bickered over prizes--Faith always wanted Ben to pick healthy snacks, and he usually gave in. They both came to Mike's memorial service, and I still have the heartbreakingly sweet homemade sympathy card they passed to me across the aisle. 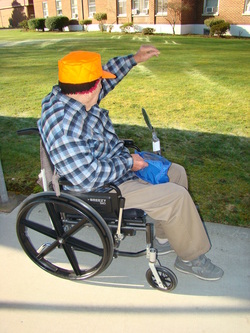 Ray was always easy to spot: Not only did he wear a bright-orange cap, but he also scooted his wheelchair backwards (with the help of a self-mounted rear-view mirror)—easier on the legs, he said. He loved to feed the squirrels, and the squirrels loved him—all the way up into his lap. 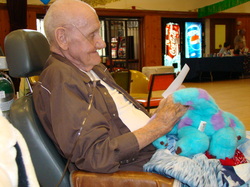 Mac was one of my favorite Bingo regulars. He was always pleasant and appreciative, and he had the deepest made-for-radio voice you’ve ever heard. When he told a joke, you couldn’t help but smile all the way through.  Here’s the last joke Mac told me, specially personalized for his audience: "Did you hear about the kid in Orting who was digging a hole in his backyard to bury his dead goldfish? The hole was about 3 feet wide and deep, and his dad asked him why he was digging such a huge hole for such a tiny fish. ‘Because it’s inside my cat,’ the kid said." 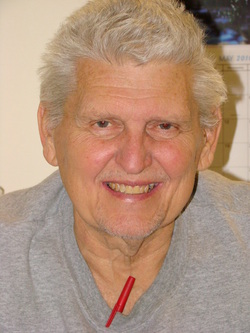 Stan is the man who wanted to win me at Bingo. He had a sharp sense of humor, a solid foundation of faith and the admirable ability to really listen and relate. I gave him my parents’ address last summer before my son and I went to Michigan for a month, but Stan lost it and never forgave himself for not writing to me. But I did. 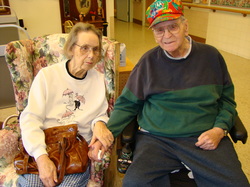 Ken Levick’s wife, Betty, didn’t live at the Soldiers Home, but it wasn’t for lack of trying. Ken would update me every visit with her progress on the official waiting list. Ken’s room is filled with photos of the two of them—he wants to see them (and her) when he wakes up, and before he goes to sleep. 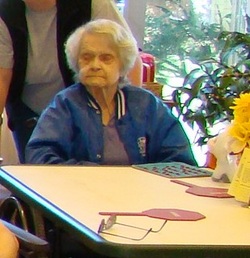 Mary was what you’d call an avid Bingo player: She was always there, and she was always there to win. And she usually did. One shelf that ran the entire length of her room was lined end to end with her booty: one fuzzy stuffed animal after another.